The moment Skyblock S3 Opened we thought "this is great, but how can we make it better?" and from that point on it was our mission to make Skyblock S4 the most enjoyable experience yet; with over six weeks of planning, custom development and hundreds of hours put in by the Blaze Vanilla team collectively, we are ready to unveil our latest offerings to you guys - based on your feedback!

Make sure to read the whole thread to not miss out on the important stuff, such as:


Please ensure you read the entire thread, as we have changed some rules listed below. For clarity, Auto clickers are no longer allowed on Skyblock and is now a bannable offence in ALL circumstances. (This includes AFK Mining, however, Alts can still be used to AFK Farms or spawners as long as it does not include autoclickers OR macros)

Something which has been incredibly prominent on Blaze Skyblock is lag; we've had hundreds of messages of people giving their "two-cents" on how to fix lag on Skyblock Greek, that the management team is "lazy" and "can't be bothered" to fix lag, and a multitude of other things. I would like to address with Skyblock S4 the reasoning behind "lag" on Skyblock.

There is three main types of lag; Ping, TPS and hardware:

After moving to 1.13 we were experience a large drop in "Ticks Per Second" - The original plan for Skyblock S2 was to move to 1.12.2 - a much more stable version of minecraft, but due to ill-advice we were mistaken into thinking that 1.13 would have been a much better solution; we were wrong.

The largest lag issue for Skyblock S2 was Detonate Enchant - Rectified S3, and S3's main lag issue was Pumpkin Farms. Pumpkin/Melon/Sugarcane farms have been fixed by making them immovable with pistons and instead they must be farmed by either mining them manually or by using Farmer Minions.

After the success of last map's Island TOP Competition, we will be running higher prizes than last map and facilitating five payouts per week. We have decided to remove Grace week due to the lack of popularity.
This map will be separated into five instalments of Island TOP Payout:

Payout Dates
Weekly Payouts
Total Payouts
The IS-TOP Competition will end on 15th August 2020. All Islands which set their /is setpaypal and/or their /is setdiscord automatically agree to the following rules listed here and are hereby entered for the competition: https://docs.google.com/document/d/1YYBlPkatYzwGRcfP4wJryJPrTfBEebfqp67lqvnGi-M

The End is Near: Introducing the End and improved Nether Islands
Based off last map, the amount of people using the nether skyrocketed compared to Season 2 and we wanted to create a new challenge. We felt that from last map, it was too easy to access the nether; with our Cluescrolls changes it is now much harder to unlock the nether. It must be unlocked using our new Island Missions (check below for more information!)
Since last map, we have buffed the generator rate in the Nether, making it significantly better than the overworld (with fortune, previously it was about the same).

Leading me on to my next point, we are now introducing The End! - We've re-introduced the End with even better generators; The end is one of the last things unlock able through our new island missions system.

BUT WAIT - There's more! We're also introducing mob drop boosts for certain spawners depending on the world. As it stands, the current mobs have different rates in other dimensions:


The return of Block Stacking

For Season 3, we decided to remove Block Stacking due to its nature to make Island TOP a huge mining grind. This is not something which we wanted dominating our economy and have rectified the issue through our new Block Stacking System!
Block Stacking must be unlocked through Island Upgrades (which must first be unlocked by /fund - read down for more information!) and utilises the Bedrock Block on your island (it is no longer buried underground in your island, it is now on a smaller seperate island) - We suggest keeping this clear so you can access it easily!

Once unlocked, the amount of blocks you can place is limited on a per-block basis for: Iron, Gold, Diamond and emerald blocks. Every 24 hours you are given more block slots to add to your island level. By upgrading your Block Stacker, you can increase the amount of blocks you get on each level up. You can also buy one-time block increments on our store.

However - this does come at a cost, the Block Stacker takes a cut of your worth for storing them (this means that placing is still the best but not needed!). Check our spoiler for some other images of the system below!

Island Stacking GUI and Upgrade Menu
Introducing the PvE Mine

From feedback of last map we have made a PVE Mine. Once thing wrong with our PVP-Based mining system (where you could mine for sponges) was that one group called BlueManGroup dominated the scene for the entire map. To give others a chance at getting sponges, we are introducing the PvE Mine!

The PvE mine is accessible from /warp pvp and has its own entrance. It is split into six tiers with different mobs:


The lower the tier, the harder the mobs are to kill. This is due to the increased sponge rate per level (You'll get a LOT more sponges on Tier 1 compared to Tier 6)

We had a few new perks to give out on this map with some of the new features and noticed there was tonnes of missing perks from Donator Ranks, so we fixed it! All ranks have been given a plethora of new perks with brand new buycraft information sheets! Check them out here:

One thing which we didn't want to remove last map was Gambling --> Due to issues with the plugin it had to be removed until a replacement found. After (literally hours) of working on Casino we have created a brand new casino!
Our new casino is located at spawn and has the following minigames:
@bradpaterson - This one was for you!

Every month, we will be releasing a new and unique crate to skyblock in the form of a "Monthly Crate" - These crates are SUPER OP and have all sorts of rewards inside; from cosmetics to useful loot on your journey in skyblock!

Each player is only allowed one of these crates and the same crate will not return more than once. Make sure you pick one up before the next crate comes round!

This means that to unlock /enchanter, players will need to contribute to the fund for all previous commands first. The money is not cumulative meaning to unlock /enchanter the entire server must collectively pay $200,000,000, only then can they purchase Custom Enchantments (the rest work the same)

How do you contribute to /fund? Type /fund to see the amount currently contributed to the project and /fund deposit to add to the pot. The quicker things are unlocked the quicker you guys get access to everything!

Masks and Inventory Pets are ways to enhance your PvP and Skyblock experience through a number of perks. Each Mask or inventory pet works slightly differently.

Masks are attached to your helmet and give permanent or chance-based enhancements - All Masks give you abilities while in PvP and your island and are mostly beneficial at PvP. Currently, the following masks exist:

Inventory Pets are in your inventory (duh) and can give abilities on right click or permanently. Currently, the following Inventory Pets exist with their abilities (yes, they're pokemon :3):

We're introducing a few new ways to progress through skyblock in the means listed above. We've given some details on this already and we're ready to unveil all of it! Each system is slightly different which we'll go through here: 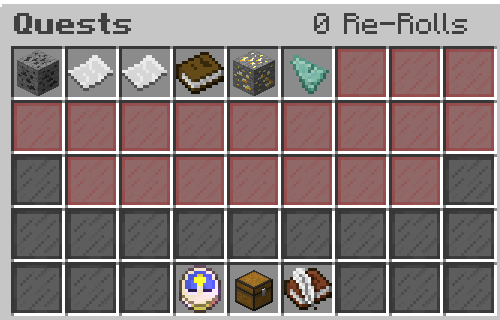 Each week you are given a number of quests dependent on your rank and can range from easy to hard. Upon completion, you are given a Blaze Shard - a new sub-economy which can be used to trade with the mystery man for rewards. Shards will stay for the entire map and can be stored, sold or traded. The Mystery man appears at spawn for a limited time with rare items which can be purchased. He only appears for a short while before disappearing again. Quests re-roll every week for new and exciting quests to earn shards with!

Some donator ranks have access to reroll quests each week. They are listed on the rank perks in the above sections

Achievements are long-term goals; over 400 of these achievements have been implemented into the server with different categories. For example: Items Enchanted, Items Eaten, Arrows shot and lots, lots more. These achievements all have rewards and are designed to be challenging. At the end of the map we will be looking at the top Achievers and adding more based on how far people have got.

On the right is the current categories for our achievements, this will expand and take shape based on community feedback so ensure you make a suggestion on the forums if you feel anything should be added.

Some of the more astute among you may notice that in the payouts section there was a call out for achievements. You heard it here first, the achievements have leader boards and the top of that leader board weekly will receive 5$ store voucher, hooray!

Island Missions is our primary questing system which you must follow in order to unlock certain features such as the nether and end. These Missions must be completed in order, beginning with the start of making an island, and later progressing onto farming mobs and taking part in PvP events.

We are implementing GKits onto Skyblock! In addition with our new Custom Enchants plugin, we have finally decided to add Gkits to our store and in-game in the form of Gems. These Gkits can be levelled up to give greater enchantments! Currently, we have the following three GKITS:

Please note, there has literally been hundreds of tweaks, changes and new features added which weren't recorded - Unfortunately, we were unable to record every single change we had due to the sheer volume (I tried my best, but missed quite a few) but they will be noticeable around the server over time.

Following this announcement, we will be hosting a series of events in the coming days. This is the schedule: